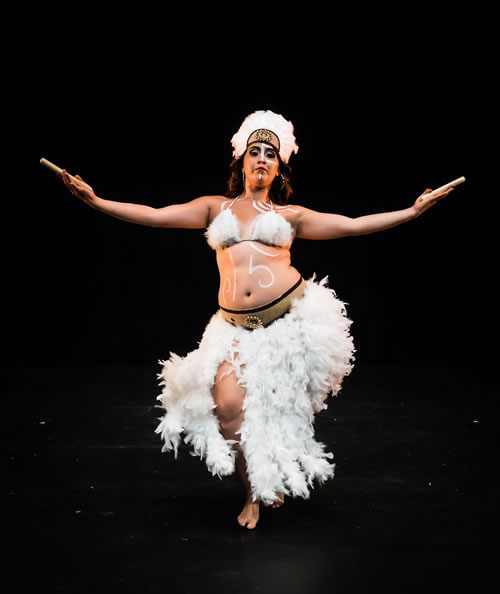 Since establishing Grupo de Danza Montun in mid-2011, Leticia Avila has worn the many hats of director, choreographer, musician and dancer with creativity, panache and masterfulness. She founded the predominantly Chilean folkloric group that also could include and respect the regions of South America’s customs, music and cultural identity. It boasts a popular cast of talented and versatile dancers from different European backgrounds such as Sweden, Scotland, Bolivia, Uruguay and Argentina, handpicked by Leticia herself.

The name Montun is a native Chilean Indian Mapuche term meaning ‘to liberate or to escape’. This philosophy is none more evident in Leticia and her group’s demonstration of the different styles of dances from Chile’s five main regions as well as other South America countries. Through choreography, costuming and interpretative musical choices, she commands flawless technique and expression, age-appropriated conduct and a professional mindfulness for audience entertainment.

Leticia and Grupo de Danza Montun may perform a very broad and fervent repertoire that usually takes into account the preservation of a native language and culture specific to a region, at the same time relishing in delightful storytelling through either traditional or modern South American music and dance and set design. It may range from ‘Traditional Central’, ‘Zona Porteno’ (a modern version of the traditional Cueca, known as ‘La Cueca Brava’), ‘Mapuche Inspired’ (a story of transition and struggle of both the Mapuche people and indigenous people in South America, accompanied by fire pois), to ‘Danzas de Chiloe’ (demonstrating the lifestyle of the people from Chiloe island) and the upcoming ‘Rapa Nui’ which is sung in the original language as well as ‘Chile Now’ showcasing young Chilean artists interpreting traditional music for modern times).

Indeed Leticia is at once fiercely authentic and colourful, carrying a most personal motto when she successfully performs live at cultural festivals and events around NSW to enthusiastic crowds: ‘Dancing from the heart’.