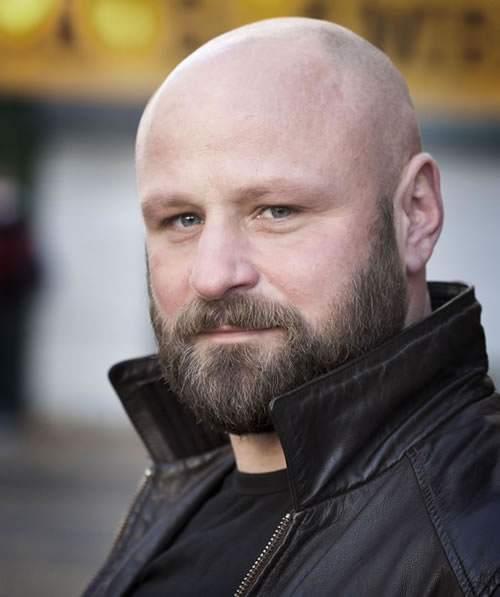 Jacek Dusznik studied acting at Bull Alley Theatre. He achieved Distinction in both Theatre Performance and ATCL Diploma at Trinity College London. The ex-boxer and rugby player speaks fluent English, German and Polish. In 2010, the Irish public discovered him in Focus Theatre’s first production, “Scent of Chocolate” directed by Anna Wolf. He also was set designer for PTI’s devised piece of “Chesslaugh Mewash”, which was part of ABSOLUT Fringe 2011.

Jacek had the pleasure of working with Irish comedy legend Tommy Tiernan in “Dave’s One Night Stand” show as journalist Tomek. He memorably appeared in the highly-acclaimed TV series “Ripper Street” on his deathbed alongside Matthew Macfadyen (“Anna Karenina”) as well as Stephen Don’s “Faraway” feature, Daniel Corcoran’s short film “Promised Land” and “Death Waits” feature by Redmond Fitzpatrick. He appeared in plays “Henry V” as Charles VI, by Katherine Murphy and in “Street Scene” as Kaplan, by Neville Caryle Style. Jacek is proud of his work on “Blink”, a short film directed by Conor Maloney (“Ayamé”), about how destinies can be shaped in the blink of an eye. Written by and starring Gavin O’Connor (“The Tudors”), Jacek acted opposite IFTA nominee Róisín Murphy (“What Richard Did”) and Luke Griffin (“Band Of Brothers”).

Two beloved career highlights come to mind: one was touring primary schools across Ireland promoting environmental awareness through “Turning the Tide” for Down to Earth Theatre Company. The other one was 2013’s “The Vikings”. Jacek found it to be special, brutally rewarding and well paid work and even spent more time on the set than some of the main actors. Gleefully amongst some of the fiercest fights: a whack to the face, riding roughshod on a warhorse, blood-splattered nevertheless had endowed the Polish emigrant with priceless insight into how to deal with large-scale professional productions.

Since the mid-2014 move to Germany, Jacek was able to obtain a UK Channel 4 job in Stuttgart. Apparently he has no qualms in getting undressed for 3 hours in a Bigest German brothel! Indeed, he is nothing if not endlessly optimistic, facilitating, driven and honest about his services with the soul of a searching artist as seen in his favourite poem below. Inspired by Terry Gilliam’s “The Fisher King” he is more at home with a crazy, mad and roguish glint in his eye, with fashionably up-swept locks so as to avoid looking like ‘every third guy on the street’!